“Covering the world of skinny-wheeled cycling; sometimes without any brakes”

Among my many and varied interests are cycling and writing. I am deeply passionate about both. Strangely enough, neither has come very easy to me.

I had such a horrible crash as a small child that I did not attempt to ride again until the 6th grade. From that point forward, you could say that I have had a love affair with two-wheels. When I was not out on my bike, I could be found tearing apart or putting back together other bikes. The frames and parts found in my parents’ basement today are a testament to that fact.

Around the same time that I began riding again, a young rider named Greg Lemond had just won the U23 World Championships. Following his career was my entry point into the sport of cycling, but I never participated in organized racing until I was past my cycling prime. Today, a healthy curiosity about racing has me lining up on the road and in the nearest velodrome.

In regard to writing, I am not a trained journalist.  My writing, instead, strikes a creative bent in the form of short stories, at least when I not writing for my day job in clinical research.  Although I have yet to be published for my creative writing, I have authored several abstracts and papers, and been published as the lead author for a paper in a well-known peer reviewed medical journal.

I have covered the sport of cycling, as both writer and photographer, at such races as the Amgen Tour of California, US Pro Cycling Challenge and the US Criterium Nationals. I was also the featured Guest Contributor for LIVESTRONG.com, commentating and moderating the site’s live blogging feed during the 2009 & 2010 Tour de France.

Our motorized two-wheeled compatriots – and I am not referring to those on e-Bikes – often wax on poetically that while four wheels may move the body, two wheels move the soul. For anyone who has put foot to pedal, whether it be in anger, as a means of getting to and fro, or for sheer pleasure, each knows that this sentiment rings through resoundingly.

What started out as a shared passion is now the musing of a solitary, or sole rouleur. Welcome to Soul Rouleur. I hope you enjoy the ride.

“A shared passion for cycling, discovered at the 2003 Tour de France, reinvented for the Internet.” 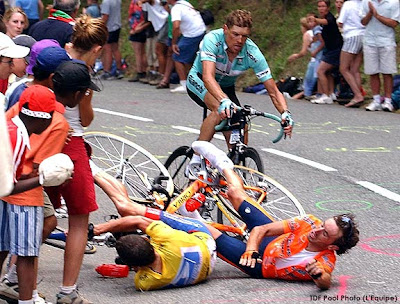 The Triple Crankset began in a humble fashion; through a series of long and drawn out email exchanges. Three years after Steve Klein, Aaron Mimran, and I participated in a Trek Travel Bike Tour that saw us tackle the Pyrenees in the final week of what was arguably the most competitive and memorable Tour de France to date, we decided to take on the blogosphere.

Since that time, our stories have been picked up by Time, USA Today, The Austin American Statesman, The Chicago Sun-Times, Reuters, and LIVESTRONG.com, and we have been credentialed as media for races, such as the Amgen Tour of California, and trade shows like Interbike (for a full list of our media credentials).

We have many to thank who have contributed to our growth, but we would be remiss if we did not thank those of you who have randomly happened upon our site and come back time and time again.

This site uses Akismet to reduce spam. Learn how your comment data is processed.

STRAIGHT FROM THE SADDLE